We believe that all seniors should have enough income to meet basic needs. 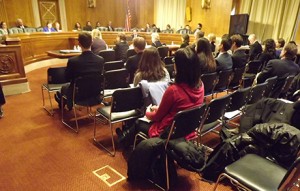 At a March 2014 hearing on senior poverty, some of NSCLC’s highest policy priorities were front and center.

NSCLC seeks to preserve, strengthen, expand and improve access to programs such as Social Security and Supplemental Security Income (SSI) that provide income security to millions of older adults and people with disabilities.

We achieve our objectives through litigation, policy advocacy, and technical assistance to advocates including case consultations, training and written materials.